Mozambique has had a social protection system in place for the last 20 years. Over the last decade, the social protection system has been consolidated with the establishment of a legal and regulatory framework for basic social protection and the development and approval of two National Basic Social Security Strategies (ENSSB, as per its Portuguese acronym). Considering the high levels of infant morbidity and mortality, the high percentage of children with micronutrient deficiencies, and the high rates of chronic and acute malnutrition, ENSSB II (2016-2024) introduced the child benefit component in the Basic Social Security Programme (PSSB).

Concerned about the issue of child wellbeing, the government of Mozambique introduced in September 2018 a pilot project implemented by the National Institute of Social Action (INAS, IP, as per its Portuguese acronym) in partnership with UNICEF.
The child benefit programme aims to improve food security of families and increase access to social services in the short term, as well as improve child nutrition and the general wellbeing of the families concerned. The benefit consists of an amount of money for each child regardless of other benefits of Basic Social Security Programmes at the household level (MGCAS, 2018). The motivation is that the programme is conditioned by the child and not by the characteristics of the family members.

This brief shows simulated impacts of a universal child benefit on poverty and inequality levels and presents estimates of the expansion costs. The benefit will be simulated for all regions of Mozambique considering the high level of poverty in all regions
across the country. The proposal for a universal child benefit policy was simulated by using the tax-benefit microsimulation model for Mozambique (MOZMOD v 2.7).

For the simulation, the following premises were assumed:

Scenario 2: an alternative scenario based on increasing the amount of the benefit allocated to one-third of the minimum wage in the civil service (1,489.25 meticais/month). The aim is to provide a higher level of wellbeing to children under or equal to 2 years of age

The disposable income of the lower-income households is most impacted by the introduction of the benefit. Gains in disposable income for households in the 20th percentile – with an average per capita consumption of 7,489.50 meticais – vary between 6.3% in scenario 1 and 17.2% in scenario 2. On the other hand, households in the 80th percentile (per capita consumption of 31,464.50 meticais) increased their income by 1.2% and 3.4%, respectively.

It is also important to notice that the per capita consumption of households in the 20th and 40th percentiles are below the consumption poverty line in Mozambique, which is equal to 15,111.00 meticais/month.

Figure 1: Effect of the introduction of a universal child benefit on per capita household consumption after taxes and transfers, based on MOZMOD simulation 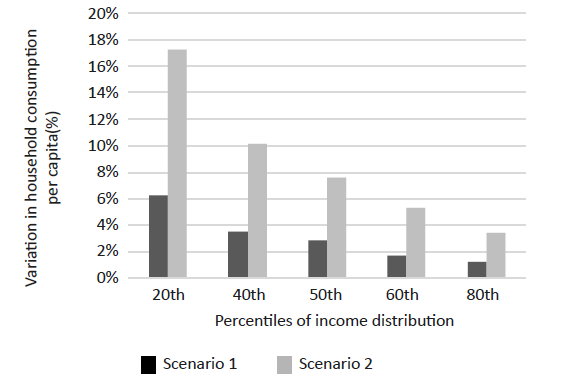 Note: the assumption adopted by the model is that all additional income generated by the transfer is consumed.
Source: authors’ elaboration based on microsimulations using the MOZMOD model.

The bottom row of the table presents the results for inequality measured by the Gini index. The simulation results suggest that inequality would reduce by 1.87% in scenario 1 and by 4.9% in scenario 2.

Table 1: Impact of the introduction of a universal child benefit in Mozambique after taxes and transfers, based on MOZMOD simulation

Notes: 1Millions of meticais per year; the assumption adopted by the model is that all additional income generated by the transfer is consumed.
Source: authors’ elaboration based on microsimulations using the MOZMOD model.

i) This note is a product of the MOZMOD Retreat, a five-day course offered by MEF, UNU-WIDER, ILO and SASPRI between 6 and 11 June. The retreat is part of the activities of the SOUTHMOD project. To learn more: https://www. wider.unu.edu/project/southmod-%E2%80%93-simulating-tax-and-benefit- policies-development. More information about MOZMOD can be found in the country report. We thank the support provided by Rodrigo Oliveira (UNU-WIDER), Pia Rattenhuber (UNU-WIDER), Gemma Wright (SASPRI), and Luis Corral (Unicef).

This Policy Brief emanates from the Inclusive growth in Mozambique — scaling up research and capacity programme.

This brief is a product of the MOZMOD Retreat, a five-day course offered by MEF, UNU-WIDER, ILO and SASPRI between 6 and 11 June. The retreat is part of the SOUTHMOD project activities. To see more on SOUTHMOD, see here. For more information on MOZMOD, see country report.