What should Mozambique do with the revenue from natural gas projects? Part I

At the beginning of this decade, large offshore natural gas fields were discovered in north-east Mozambique. Investment is now flowing into the country, and a boom in the natural gas sector is expected. According to estimates from Mozambique’s Ministry of Economy and Finance, additional tax revenues from natural gas projects may amount to US$50 billion by 2050.

Mozambique is among the 10 poorest countries in the world, and as such these additional revenues are sorely needed to fund inclusive growth and development in the country. Thus, a key question is: what should Mozambique do with these additional tax revenues once they start to flow in from the extractives sector?

In an effort to kick-start an evidence-based public debate over this question, we asked our trainees in the Inclusive Growth in Mozambique programme to brainstorm alternative possible uses for the revenues and to present them at a poster session during our annual conference and public forum on natural gas.

In this first part of the blog series we introduce the alternatives proposed by Isa Chiconela (medical coverage for all people infected with HIV), and Edson Mazive (universal cash transfer programme for the poor).

1. What could Mozambique do with the projected additional revenues from natural resources?

UNAIDS estimates that about 2.1 million people (7.8% of the country’s population) live with HIV, but less than half of them receive the necessary treatment. Mozambique could use new-found gas revenues to invest in HIV treatment. The central aim of this intervention would be to ensure medical coverage for all people infected with HIV in Mozambique.

2. What would the expected outcome of such an intervention be?

With the intervention presented in my poster, we could expect an improvement in life expectancy of 5.2 years, a reduction in the number of new infections per year, improvement in the quality of life of infected people, and zero transmission of HIV from mothers to their children.

3. What are the estimated costs of the intervention?

The expected additional revenue from gas discoveries is about US$50 billion; I calculated the potential cost of my intervention according to three different scenarios. In scenario 1, the prevalence of HIV stays the same. In this scenario the costs treating all those infected would be around USD$19.5 million. In scenario 2, where the prevalence rate reduces the cost are about US$18.6 million. In the pessimistic scenario 3, where despite all efforts the HIV prevalence rate increases, the costs are around US$20.5 million.

4. What did you learn from this poster session?

During the process of producing the poster I learnt a lot. I saw that Mozambique faces many difficulties, and as such the setting is very important. We must take into account the real needs of the country and interventions benefiting a large part of the Mozambican population.

The recommendation I put forward is extremely important since we are talking about an epidemic that has wiped out countless numbers of lives, increased poverty, and reduced the quality of life of many persons.

At the session a further six possible uses for gas revenues were presented, and it is up to decision makers to decide on their priorities. This makes our role as economists somewhat challenging. since all the alternatives presented are important, but they cannot all be implemented at the same time. 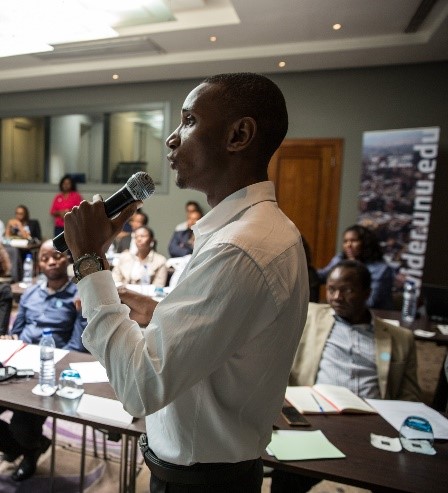 1. What could Mozambique do with the projected additional revenues from natural resources?

With the projected additional revenues, Mozambique could implement a universal cash transfer programme for the poor. My proposed intervention is to expand PSSB (Programa de Segurança Social Básico, Basic Social Security Programme) from the 710,000 poor people expected to be covered by 2019 to all poor people in Mozambique.

2. What would the expected outcome of such an intervention be?

This intervention would contribute to poverty eradication in Mozambique and significantly improve poor people’s standard of living. My solution is based on the experience of countries such as Mexico, Pakistan and Kenya where cash transfer programmes have reduced poverty significantly.

3. What are the estimated costs of the intervention?

The intervention starts from a low level, covering just 5% of poor people in 2019. Assuming that the coverage rate grows annually by 20% and that one poor person receives on average a cash transfer of MZN300 (about US$5), by 2040 (four years after cash transfers reach all those living in poverty) the proposed intervention will have an estimated cumulative cost of US$16.8 billion. This is approximately 34% of the gas revenue expected by 2050.

4. What did you learn from this poster session?

For me, writing and presenting the poster was a good experience and, at same time, very challenging. For a poor country such as Mozambique it is very easy to identify problems and interventions that require funding. Therefore, finding the best possible solution for a given problem is the critical issue. During the poster session I had the opportunity to talk with participants, who all agreed that poverty is a problem and that eradicating it should be a priority. However, they had different perspectives on how to eradicate it.

The views expressed in this piece are those of the author(s), and do not necessarily reflect the views of the Institute or the United Nations University, nor the programme/project donors.

This blog series is based on posters that were prepared before Cyclone Idai hit Mozambique in March 2019. However, the posters and the blogs are based on long-term calculations, and the recent disaster does not influence the conclusions and suggestions presented in the posters.

Blog | What should Mozambique do with the revenue from natural gas projects (Part II)?

Blog | What should Mozambique do with the revenue from natural gas projects (Part III)?

Public Forum: Mozambique as a natural gas exporter - Lessons from the past experiences